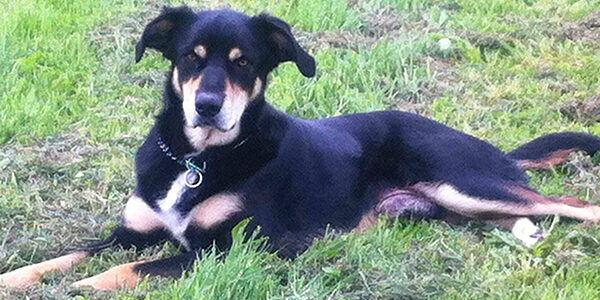 This is my beautiful Huntaway-x –   his name is Bounce and he is coming up 7 years old in August. He has grown to be quite a big boy at 34kgs.  I adopted Bounce from the Humane Society six years ago. My previous dog had passed away two years earlier and when I saw Bounce on the Humane Society website I knew that I could give him the home he deserved. He looked so sad and lonely that I just had to bring him home and take care of him.  It took about 12 months or so for him to realise that people and things weren’t going to hurt him.  He absolutely refused to go outside after dark to go to the toilet so I put in security lights along the back of my home which solved the problem.  He was scared of everything, vacuum cleaner, holding items in your hand and the hose.  He has come a long way and now stands in front of me when I’m vacuuming and actually have to ask him to move away and he is amazing when I wash him with the hose, he doesn’t run away and hide.  He is an inside-outside dog but mostly inside as he enjoys company.  He loves going for long walks, going out in the car and  being at the beach. He is the most gentle, loving, amazing animal I have ever met!!  In all the time I have had Bounce he has never once barked while at home – he will bark when we go walking and throw things for him to chase but when he is at home he doesn’t utter a sound.  If anyone knocks on the door he will go and get me but he doesn’t make a sound.

Thank you Humane Society for bringing Bounce into my life.